Are you going to visit the caves in Bonito? Learn about the stalactites and stalagmites!

In Bonito you will learn a lot about speleology, the science of natural caves and karstic phenomena.

Due to its formation by calcareous rocks, this region is one of the three biggest areas with the presence of caves in Brazil. Its more than two hundred caves between the cities of Bodoquena, Jardim and Bonito, turning the region into an important speleological center in the country.

While visiting the tours at Lago Azul Cave, São Miguel Cave, São Mateus Cave and the Abismo Anhumas, you will hear about stalagmites and stalactites. Understand what these odd words mean:

They are the easiest mineral formations to find in a cave. The stalactites hang from the ceiling in a sharp conical shape. The stalagmites have a similar aspect, but they grow in the opposite direction, from the ground up. Both arise because the calcareous rocks of cave areas are usually very soluble - which means they are easily dissolved by water. Infiltrating the cracks in the terrain, water from the rain or from the rivers enter the subsoil. On the way it carries the dissolved limestone of the rocks. In the ceiling of the caves, this water begins to drip, slowly forming a kind of straw with the fragments of the minerals it carries.

When this straw gets clogged, the residues accumulate in its base, which becomes wider. It gives the stalactites its typical conical form. On the ground right below them, stalagmites arise. The water dripping from the ceiling accumulates minerals on the ground, creating another sculpture that growns towards the stalactite. If the dripping goes on, the tendency is that both structures merge into a single column. This merging, of course, does not happen overnight.

"The growth rate is of fractions of milimeters per year. And only if there is enough dampness in the cave", says the geologist Ivo Karmann, from the São Paulo University (USP). Besides being a scenery of rare beauty, the caves sculpted by the dripping water keep the history of the weather in the region. "By measuring the growth rate of stalactites and stalagmites, we have an idea of the rain index of the place. They are the only registers protected from the erosion and from the wind which allow us to study climatic variations of up to 100 thousand years ago. That is why it is very important to preserve them", says Ivo.

When you are in Bonito, appreciate these beauties sculpted by nature and imagine for how long they have been molding themselves, drop by drop. Impressive, right? Bonito MS for the Third Age 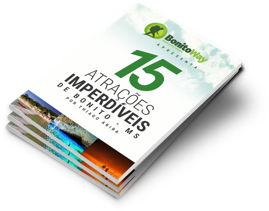